We specifically based ourselves in Wapping to access Cherryduck Studios’ and The Nest Post’s world-class video and audio production facilities. As well as being genuinely lovely people, they bring brilliant creative work fresh from the world of fashion, the motor industry and a wide range of challenger brands and have been instrumental in building our multimedia output. 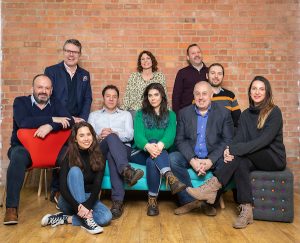 Keep up-to-date with news and views.

There are numerous issues facing the industry and by sharing ideas (not business sensitive) we can promote best practice and improve the standing of our industry and profession.

Views on what’s going to make a difference in the months and years to come.

Multi award-winning wealth manager and self-confessed Scottish Presbyterian workaholic. Previously founder and former CEO of Investment Quorum and one of the advisory communities best known and most well respected figures. A former serviceman and Past Master of the Guild of Entrepreneurs, and the driving force behind Octo.

“Mr Prufund” and previously Investment Director at PPMG.  Technology, governance and finance are his bag.  Who better than one of Europe’s biggest mutual fund managers to look after the kit, governance and investments?  Andy is one of the shrewdest and most insightful figures in the investment industry and an outstanding investor in his own right.

Rob is one of the best known and best connected figures in his space and has been CMO at more firms than he cares to mention but has learnt something from each and every one. He was most recently CMO at Janus Henderson where his team won just about every marketing award going during his 5 years at the firm.

Jon joined Octo from Financial Express where he helped build one of the UK’s most successful financial publishing businesses.

Gary is a multi-award winning journalist joining Octo from Omnis. He was previously Editor of Portfolio Adviser.

Dimitri studied engineering at Oxford Brookes following which he completed several placements in the financial services sector. He came to Octo to do the same but we were so impressed with Dimitri we hired him.

Debbie has worn many hats in financial services, which equips her well for keeping the conversation flowing.  Believing that ‘Conversation is king, content is just something to talk about’, she ensures that we generate for members the very best, actionable, insightful content that creates debate and cuts through the noise. She brings masses of production experience from BrightTalk.

With almost a decade’s experience supporting the financial adviser community, Sorrel joins most recently from the Personal Finance Society where she managed their strategic partnerships and professional development programme.

Sam is a well-respected and much-loved freelance journalist and now Octo host. Sam has worked in senior editorial roles with Financial Times Business, Incisive Media and Centaur Media as well as a multitude of financial companies as content creator. Production and presenting experience have taken her from Asset.tv to Radio 5Live.

The former editor of Money Marketing, John is one of the best connected and most well-read commentators covering the IFA sector. He is a regular contributor to many of the key financial publications and was recently described by a senior adviser as “one of the few journalists that asks the questions others are afraid to”.